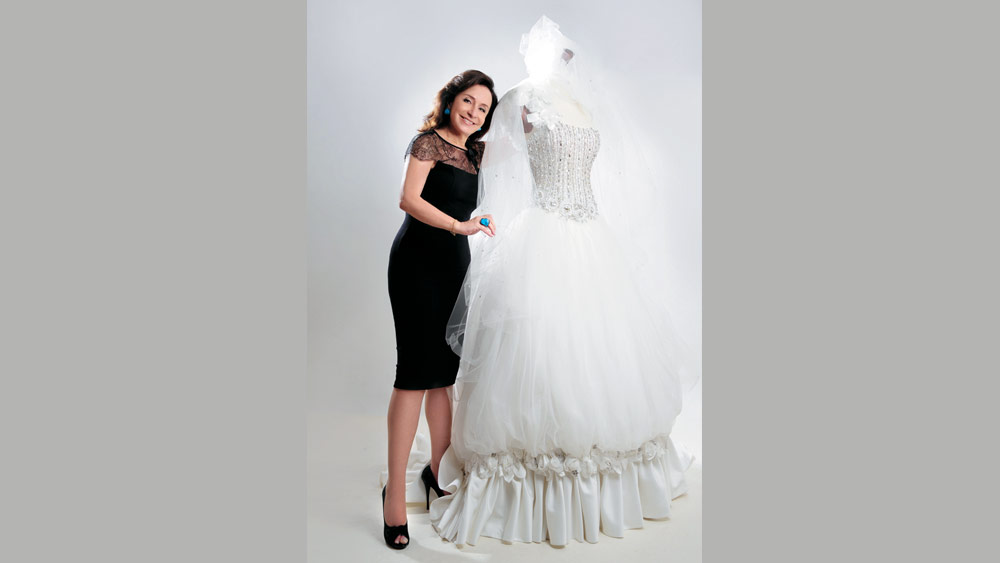 A beautiful page in the history of Lebanon

Interior architecture is her background and styling is her great passion. Passion of one day, expressed on the benches of the school, through models of dresses she drew to her friends; passion always revealed through the fashion workshop that bears her name, but mostly through traditional theater costumes or other, she drew out of the clothing heritage of her country. And as we say, ” first love lasts forever ” over sixty immortal works mark the career of the designer and mother Papou Lahoud Saade . A beautiful page in the history of Lebanon she tells to Prestige.

Papou Lahoud Saade showing a wedding dress of her creation in her fashion workshop ” Papou ” founded in 1974.

It is a romantic note found in your first name, Papou. What is its significance? It’s not very romantic, but friendly. My real name that appears on the ID card is Amal, which means hope. I was born eighteen years after my father returned from Argentina to Lebanon. With my curly hair and the first word I stammered, ” Papo ,” my father called me Papou , which I kept .

Were you born in an artistic family environment? There are no artists in the family. My father was the deputy of Jbeil and Keserwan , a politician, and my mother, a housewife, but who loved art . She never hesitated to take us to all art events, theater, ballet, music … My older brother Romeo was predestined by my parents to a political career, but he chose art. At first, it was disappointment for the family, later turned into admiration and support. Aline , my older sister , studied piano, but she became a political journalist . For my part, I have a degree in interior design, but I opted for dance and design. And at a time when Nay, my sister, is choreographer and my right arm in the making of clothes, Nahi is a theater producer and artistic director.

At what age did you start and what made you decide for styling? I started my career more or less at the age of fourteen. I drew models of dresses to my friends on the benches of the school. Then I drew for a famous fashion magazine, unique at that time. And when Romeo was chosen in 1963 to present the show ” Al- Shallal ” at the Festival of Baalbeck , he offered me to make the costumes, and he introduced me. He took me first see Baalbeck that I did not know, then the Museum of Clothing in Beiteddine , and finally he showed me lithographs of many great Orientalists, to set design, in order to transpose the actual costume in theatrical costume . I would like to mention here that the most important documents concerning the Lebanese costume date from the eighteenth and nineteenth centuries, there were very few of the seventeenth, and absolutely nothing of the earlier period. I think that this deficiency is due to the fact that Lebanon, by its location on the coast, at the crossroads of East and West, has undergone many invasions, and foreign crossings, which destroyed the civilizational aspects. Unfortunately, there is a lack of attachment to our roots.

Tell us about your journey … As I already mentioned, Romeo introduced me and made me realize a lot of models. To my delight, especially the concept of stylist was still little known in Lebanon. So I studied for four years, interior architecture at the Camondo school in Paris, while continuing to make costumes for Romeo. Back in Beirut, graduated, I received a flood of job offers for costumes for plays, modern, musicals, ballets … So I ended up swapping the interior architecture against styling. I confess that I did not choose my job, it is more like it chose me. In 1974, while I made costumesfor theater, I also made wedding dresses and evening dresses in the fashion workshop ” Papou ” that I founded at the request of customers. For fourteen years, I eclipsed theater costumes, but not sewing to be with my husband and my children.

You also made hostess uniforms for airlines and other … The first creation of uniforms for hostessesgoes back to 1973. This was for the Royal Jordanian Airlines, Alia. Alongside with wedding dresses and evening dresses made up in my shop, I realized the Jordanian and Palestinian costumes for the Royal group of Jordanian folklore, uniforms of hostesses of the Lebanese Tourism Office and those of the female staff of the General Security. The Sultan of Brunei has also asked me to dress hostesses of his private aviation company. In the 90s, it was the turn of the hostesses of the national airline, MEA to wear my uniform, as well as other institutions such as the Duty Free Shop. Papou Lahoud began creating uniforms in 1973 , dressing the hostesses of the Royal Jordanian airline Alia , seen in this photo taken with King Hussein of Jordan.

In 1979, the hostesses of the National Lebanese Tourism Office dressed by Papou .

Tell us the story of Papou Lahoud, the person … I am from Amchit, but my birth took place in Hbaline, a nearby village, where my maternal grandmother lived. Invited to lunch with her, my mother strongly felt the pains of childbirth and put me into the world at home, surrounded by all the family. It was February 14th, at 20 hours. Outside it was raining in torrents, and inside an overwhelming atmosphere. Later, I did my schooling at the Franciscan Sisters of Beirut and obtained the French and Lebanese high school graduations, followed by my diploma of interior design in Paris. As I had always dreamed of being a painter, I organized two exhibitions, one of which took place before my trip to Paris, in the famous “Le Grenier.” Paintings, gouaches and prints were sold, exceptone piece that my father kept. In 1979, it was the big day, my marriage with Professor Bashir Saade, cardiovascular and thoracic surgeon. He liked my work that gave him serenity and relaxation enormously. My children, Bashir, PhD in political economy, and Yara, a graduate in public relations and stylist designer at ESMOD, love art and music. Bashir is now the father of a little boy, and me, his happy grandmother.

How do you feel, as Grandma? I am ” liquefied ” when I see him or just think about him. I love my children, what would it be for my grandchild? The house of my grandparents at Hbaline became ours. I kept its traditional and ancient heritage, and all the innovations that I made are in the same spirit.

Would you be at the 34th musical with your signature on costumes? In fact, I made thirty-three with Romeo, as in a musical, I dressed the group of the Royal Jordanian folklore. Between 1971 and 2014, I made a sixty pieces.

How is the selection of theatrical costumes? The selection is done taking into consideration the story, the writer and director. It all depends on the play. One must know how to influence the viewer through the costumes and colors. In 2012, Papou creates the costumes of the play 3a ardel Ghajar . Papou Lahoud has designed the costumes of the Royal Jordanian Folklore group .

In Tarik el Chams, where did you draw your inspiration? And the woman you dressed, to whom she looks like? to a fairy or an ordinary woman?Tarik el Chams is a tale invented by Romeo. It is not a historical play, but the viewer has the impression that the scene takes place in Lebanon. The decoration of the palace reminds ofDeir el Qamar . For costumes, I am based on the second half of the nineteenth century, but also on my imagination. As for the woman I dressed, she is not the only heroine of the play. There are several, in fact. The owner of the palace Morjane, I dressed her in a more traditional spirit than the other. Antara, the mischievous little girl is dressed in a fanciful way. Bdour, the woman who comes out of nowhere, I imagined her with an oriental touch, but with a lot of fantasy. Like a fairy who comes to save others. Variety of colors for the costumes of the heroines of Tarik el Chams .

How do you feel when the audience congratulates you? Are you the only Lebanese designer to specialize in traditional costumes? I am extremely touched. But that does not prevent me from having a critical point of view regarding my work. Well, I ‘m the meanest critic of myself. In general, Lebanese designers have no interest in theater, which is not profitable. That’s why I ‘m more or less one of the only creative traditional costumes.

What are the essential fabrics that recur in all your creations? There are no essential materials. I prefer the soft fabrics that follow the movement of the body of the artist. The embroidery is not essential.

Do you have a penchant for a certain period of history? Is your style traditional or varied? I have no particular fondness for a specified period. My style is quite varied. I love the modern and futuristic, I started with tradition, because of the theater. We must never deny the tradition. You have created wedding dresses. Which style of bride do you prefer? Every bride has her style, her beauty, her youth. To what do you attribute your talent?To God.

What are the closest plays to your heart? I like ” Yasmine ” of Romeo. Not specifically for costumes, but because it is rich in poetry and nostalgia. Romeo put all his heart in writing this play.

Do you regret the period of magnitude of Lebanon of the 50s and 60s? I do not like regrets. When I woke to life, there was war. I live in the moment with a look towards the future. Interview by MIREILLE Bridi BOUABJIAN

What is your main character trait? I am too frank. Favorite quality in a person?To be frank. Your main quality? Forgiveness. I do not know whatgrudge is. Your main fault? Nervousness. If you were not Papou Lahoud, who would you have liked to be ? Papou Lahoud, the ballerina, ballet dancer. What country would you like to live in? Where I live in Lebanon. What is your favorite color?The turquoise color. The flower that you love? Peony. The bird you prefer? Dove . Your readings?Authors, favorite poets? I love books, the romantics. My favorites are Amin Maalouf and Alfred de Vigny . A model hero in your life? My husband, Professor Bashir Saade . What do you hate most? Lies. A gift of nature that you would like to have? The beautiful voice of Salwa el Katrib, my sister in law .Your motto in life? Doing what I love, without any obligation.

Next
Saliba Doueihy: Founder of an innovative art