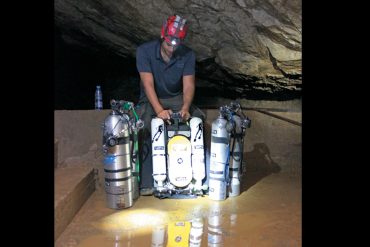 prestige·17/11/2014
Prestige issue 256, November 2014
The project of the Lebanese Cave Diving Project began in 2013 with the discovery of underwater cave of 1000m at Nabay arriving at a depth of 43m. The purpose of the Lebanese Cave Diving Project is to explore and build maps of underground caves, and to educate and train future cave divers. The project Jeita66 followed with the
Read More
DivingLifestyle

Chronicle of a mutation: From terrestrial humans to underwater creatures

prestige·02/09/2014
Prestige issue 110, July 2002
No, you do not need to be an outstanding athlete for diving. Wrongly considered as a dangerous hobby, certain sports are riskier and less exciting. Diving allows us to discover the marine world.
Read More
DivingLifestyle

prestige·29/08/2014
Prestige issue 111, August 2002
The fishermen were accustomed to cast their nets over this particular area of fish off Tripoli. This intrigued Walid Noshie because divers know, fish are attracted by wrecks. Walid therefore decided to explore it with his team of the NISD. After four failed attempts, due to poor visibility and currents, one day per 60 meters deep, an elongated shadow loomed before the astonished eyes of the divers.
Read More
DivingLifestyle

The Ghost ship of Batroun

prestige·29/08/2014
Prestige issue 117, February 2003
The sea jealously guards its secrets, but sometimes it consents to unveil a mystery. These boats buried there are not only wrecks, each carries a story, a drama. Old fishermen are their guards who took out of the sea lessons of life, who have drawn their wisdom there. Of the wreck we explored, we know one thing: a ship carrying
Read More
DivingLifestyle

prestige·26/08/2014
Prestige issue 118, March 2003
Once there was Saidoun, a lost city island, which disappeared into the depths of the sea, an island that created so many legends and raised envy; we end up believing that only it existed in the imagination of Phoenician and Greek historians, until ... when a diver discovered quite by chance, one kilometer off Sidon, the remains of a city.
Read More
DivingLifestyle

Sea turtle in Lebanon: a Lesson of Survival

prestige·25/08/2014
Prestige issue 119, April 2003
Imagine a history dating back 100 million years, the story of an animal that has succeeded where the almighty dinosaurs failed: survive, despite climate changes. Today, a greater threat to the turtle, a danger that was not intended by nature: the destructive hand of man. In Lebanon, it was barely mentioned until the day when a woman met them by chance
Read More
DivingLifestyle

On the edge of discoveries

prestige·21/08/2014
Prestige issue 122, July 2003
Testimonials from father to son. Fishermen from this coastal village speak of a plane shot in the Second World War and turned into a ball of fire, evidence that pass into legend until, more than half a century later, diving off the coast, we found a wreck lying12meters deep. But what is the identity of this mysterious plane?
Read More
DivingLifestyle

The Fascinating Universe of our Seabed

prestige·20/08/2014
Prestige August 2003, issue 123
Our Mediterranean, which caresses the shores of Lebanon, hosts fauna and flora of incredible wealth. We do not realize it but as long as we indulge ourselves in the pleasures of diving, it is a whole world that is revealed to us and that we should think about protecting to save our ecosystem.
Read More
DivingLifestyle

prestige·19/08/2014
Prestige issue 124, September 2003
Fascinating pictures. To get them, we had to disturb the world of silence and make no less than twenty dives... by 60 meters deep! Strong running water, poor visibility, all must be taken into account. Wreck diving requires hard training , a very specific technique, and the use of several gas mixtures.
Read More
DivingLifestyle

Greetings from the Kingdom of the Sea

prestige·19/08/2014
Prestige issue 125, October 2003
Sarah, very comfortable as a fish in water, does not hesitate to remove the oxygen mask to send fans of the "Dive" column aquatic kisses.
Read More
DivingLifestyle

prestige·19/08/2014
Prestige issue 132, May 2004
It's off Marsa Alam, two hours from the shore, that these photos were taken. A wonderful little bay houses these "nice friends" of the man affectionately known as the "dolphin house." Equipped with masks and snorkels-the bubbles produced by scuba equipment would spooked dolphins-we move slowly, cautiously,
Read More
DivingLifestyle

prestige·18/08/2014
Prestige issue 134, July 2004
We are a few hours of Sharm el Sheikh, the heart of the Red Sea. The Thistlegorm was discovered for the first time by Captain Jacques-Yves Cousteau who published a book about it without giving its exact location. It was only in the 90s that divers were found by pure chance on the deck of the Thistlegorm and brought back to our memory the
Read More
Load More