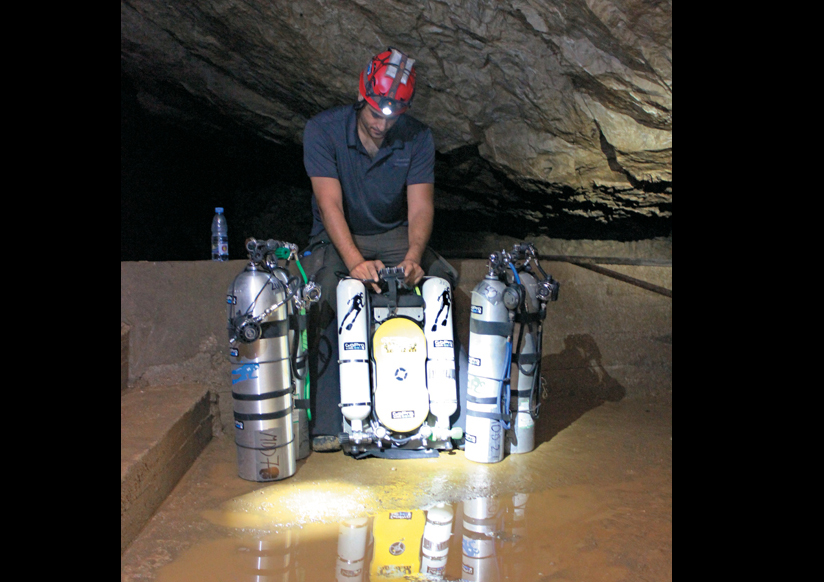 The project of the Lebanese Cave Diving Project began in 2013 with the discovery of underwater cave of 1000m at Nabay  arriving at a depth of 43m. The purpose of the Lebanese Cave Diving Project is to explore and build maps of underground caves, and to educate and train future cave divers. The project Jeita66 followed with the discovery and exploration of new underground galleries of the Jeita Grotto. There are more than 600 dry caves in Lebanon with rich prospects of discoveries. It is a new era of exploration that begins with documentation and videos in support. This project is a cooperation between Pure Tech (Simon Nadim) and Caving Club of Lebanon. Simon Nadim, professional trainer of underwater cave diving and deep diving, holder of international qualifications in this area, takes us into new unexplored depths of the Jeita Grotto. Simon Nadim and the team of the Lebanese Cave Diving Project.

Explorations of the Jeita Grotto

“The place where I dive now was discovered in 1954 by Caving Club of Lebanon expedition led by Sami Karkabi. It is a lake which is the main source of running water from the underground river of Jeita, which is 6.400m upstream of the tourist entrance of the cave. Previous explorers had done an awesome job with the equipment available, each in his time. “During the first dive in 1966 within this siphon, three divers including Sami Karkabi  and two French divers have explored 120m tunnel water arriving at 24m depth. They had to carry their equipment for two days in the mazes of the cave to reach the lake. A team of sixteen people had to carry the equipment from the entrance. In 1971 and after three years of research, a tunnel of 500m was dug from the mountain leading directly to the lake to allow routing of the hardware for building a dam to regulate the water flow. “In 1975, the diver Michel Majdalani entered at a distance of 150m in the tunnel submerged, arriving at a depth of 40m. In 1993, a mission of Caving Club of Lebanon under the auspices of the Swiss diver Jean-Jacques Bolanz made four dives in the tunnel and have entered 240m distance reaching 64m deep. And no serious attempt has been undertaken. Starting from this lake, begins the diving of Simon Nadim inside Jeita Grotto on 470 m, of which 370 m explored for the first time. © Photos: Johnny Tawk and Charbel Aoun The entrance to the tunnel that leads to the lake
In January 2014 Simon Nadim undertakes new research and made several dives that allow him to discover new galleries and develop a detailed map of the cave. “For that I had to spend more than forty hours underwater. I managed to exceed 240m realized by Jean-Jacques Bolanz to reach 470m inside the cave and 66m deep underwater. At the end of the explored path I discovered a giant maze filled with landslides of rocks. With the currently available infrastructure, it is impossible to go further because it is dangerous to exceed 300 minutes of diving without an underwater decompression chamber. A depth of 9m was reached at the bottom of the cave. The data I collected will be identified and a documentary film will follow. “ ©   Lebanese Cave Diving Project / Photos: Simon Nadim
There are galleries inside the Jeita Grotto, and a huge chamber forty meters high. And the width of these galleries can vary between 1/2 and 20 meters.

This vast project of exploring caves in Lebanon is a cooperation between Pure Tech (Simon Nadim) and Caving Club of Lebanon. Pure Tech is responsible for scuba diving, exploration, inspection and supply diving equipment, while the task of Caving Club of Lebanon is related to providing logistics data on land to support and to supply geological information. The exploration project Jeita66 that began in January 2014 includes two phases.

Phase 1 has been completed with the development of a map for a distance of 550m from the underground cave including the recently explored 310m to a depth of 66m. This is a project that required dives of 180 minutes to 320 minutes at a temperature of 14° C with decompression of long duration.

Phase 2 will begin when the construction of a decompression chamber will be completed and the renovation of the rail in the tunnel that leads to the start of the dive.

Simon Nadim explains: “There are several sources that feed the Jeita Grotto. The largest could come from Janna lake that has its source in Nahr Ibrahim, but these are assumptions that remain to be proven with further exploration. Scientists had made this assumption from geological studies. ” 370 meters have been discovered and explored for the first time.

The appearance of the interior of the cave is irregular. It starts with a slope of 18m under water, back up to 12m to go back down 64m and up to 40m before dropping back to 66m and then up 9m at a distance of 470m underground. These reliefs are a real danger for a diver unfamiliar with this type of diving and without adequate equipment and especially without proper training and qualifications. This requires years of experience and training. To continue exploring the Jeita Grotto, it is essential to build a “dry” chamber under water allowing the diver to decompress and keep in a dry and warm environment where they can eat and drink. In addition, it is necessary to restore the railway that connects the top of the mountain to the lake to facilitate the movement of diving equipment. It is also important to continue the exploration of the cave to understand the origin of the water that feeds it to protect it. Also, one should not neglect the possibility of discovering another cave as spectacular as Jeita grotto.
Previous
Michèle Souhaid : “Passion and Professionalism of the al Mandaloun family “
Next
Lebanese Wine