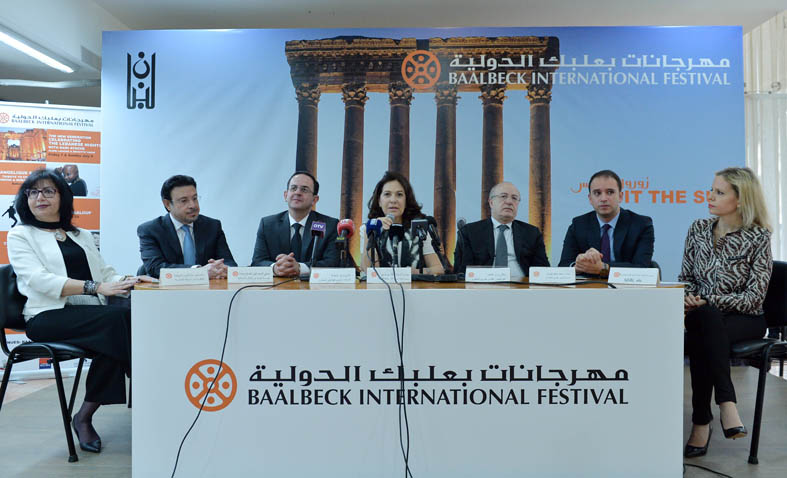 Every year, the committee of the International festival of Baalbeck announces in the spring the festival’s program. This year, in the presence of the minister of tourism Avedis Guidanian and the minister of culture Ghattas Khoury, along with notables from the region and other directors and sponsors. The president of the committee of Baalbeck International festival Mrs Nayla de Freige, unveiled the diversified program that will enchant the Lebanese public.

Friday 7th and Sunday 9th July, 2017
Steps of Bacchus Temple
The Baalbeck International Festival has been supporting Lebanese musical creation since 1957.  The Festival’s «Lebanese Nights» have given the opportunity to the Rahbani Brothers, Toufic El-Bacha, Zaki Nassif, Romeo Lahoud, Walid Gholmieh, Philemon Wehbe, Abdel-Halim Caracalla and others, to create their major works that have survived in our collective memory. The eternal voices of Feyrouz, Sabah, Wadih El-Safi, Nasri Shamseddine, Samir Yazbek, Issam Rajji, Melhem Barakat, Elie Choueiry, Assi Hellani and many others have resonated in the Baalbeck Temples.

For the 60th anniversary of the «Lebanese Nights», the Baalbeck International Festival will allow the younger generation of artists to showcase their talent, by performing songs of the past as well as their contemporary repertoire, in a fabulous and colorful show of songs and dances.

Saturday July 15th, 2017
Steps of Bacchus Temple
Angelique Kidjo, the three time Grammy award winner with a 20-year discography, and thousands of concerts around the world, is one of the biggest African singers on the world stage. TIME Magazine calls Angelique Kidjo “Africa’s Premier Diva”. She is named as one of the 50 African Icons by the BBC.
A powerful singer, stunning vocalist and tireless performer with eclectic musical influences, the highly respected worldwide artist, Angelique Kidjo will perform at the Baalbeck Festival, in a one of a kind concert blending world and jazz music, as she will pay tribute to three iconic singers: Celia Cruz, Nina Simone and Miriam Makeba.
www.kidjo.com

Ibrahim Maalouf, world-renowned talented trumpeter and composer, is back in Baalbeck with a special show conceived for the Festival. In 2014, he was awarded the Victoire de la musique in the World Music category for his album Illusions. In 2015 Ibrahim Maalouf received a Nomination at the French film-industry’s César Awards, Best Original Music, for his work on the film Yves Saint-Laurent. This year he was awarded a Victoire de la musique for his triumphant Red & Black Light tour, a Prix Lumières and a César Award for Best Original Music for his work on the movie Dans les forêts de Sibérie.
After two memorable performances for the Baalbeck Festival, Ilik Ya Baalbeck show in 2015 and the Kalthoum concert in 2016 at the Casino du Liban, Ibrahim Maalouf will perform on the steps of Bacchus Temple for an exceptional and massive concert with special guests on Saturday July 22nd 2017.

Sunday July 30th, 2017
Bacchus Temple
The sensational French piano trio made up of Vincent Coq (piano), Jean-Marc Phillips-Varjabedian (violin) and Raphaël Pidoux (cello) is acclaimed for its sensitive style, technical mastery and almost telepathic mutual understanding. The Trio Wanderer is one of the world’s foremost chamber ensembles that has performed on the most prestigious stages. Trio Wanderer celebrates 30 years together with over 20 albums released. They have been awarded several prizes including three Victoires de la Musique for Best Instrumental Ensemble of the year and recently the Diapason d’Or of the Year for their latest work paying tribute to Dvorak. Trio Wanderer will perform Rachmaninov, Dvorak and Schubert in the intimate setting inside the magnificent Bacchus Temple.
www.triowanderer.fr

Friday August 4th, 2017
Steps of Bacchus Temple
Samira Said is one of the biggest Arabic superstars today with a repertoire of more than 50 albums, many massive hits and successful music videos. Singer, songwriter, performer, producer and actor, she is one of the most accomplished Arab singers of the last three decades. Samira Said has achieved an unusual longevity in the Arab world, frequently adopting new musical styles, such as Tarab, Raï and Jazz. She has produced a series of albums including Inssani, Khaifa, Ashka, EntaHabibi, Kul Dee Eshaat, AyamHayati and Ayza Aaich. Her album Aweeni Beek went on to sell more than 25 million copies. The acclaimed diva won more than 40 awards including a BBC Award for Best Artist in the Middle East. Samira Said will perform her biggest hits for her numerous fans on the Steps of the Bacchus Temple, Friday August 4th 2017.
soundcloud.com/samira-said
TOTO

Tuesday August 15th, 2017
Steps of Bacchus Temple
40 years together, thousands of credits, biggest selling album of all time: Michael Jackson’s Thriller, and accolades to their names, TOTO remains one of the top selling touring and recording acts in the world.
In 2015, Toto released their first new studio album in ten years – TOTO XIV. It debuted Top 10 in nine countries around the world and became their most successful album since 1988 in the U.S. and UK.

As individuals, the band members can be heard on an astonishing 5000 albums that together amass a sales history of a half a billion albums where NARAS applauded the performances with more than 200 Grammy nominations and were inducted into the Musicians Hall of Fame in 2009.
The core Toto members, Steve Lukather, David Paich, Steve Porcaro, Joseph Williams joined by Lenny Castro (percussion), Shannon Forest (drums), Shem von Schroeck (bass), Warren Ham (saxophone, vocals) will rock your heart out with your all-time favorites Africa, Hold the line, Stop loving you in addition to their latest hits live at the Baalbeck International Festival.
www.totoofficial.com