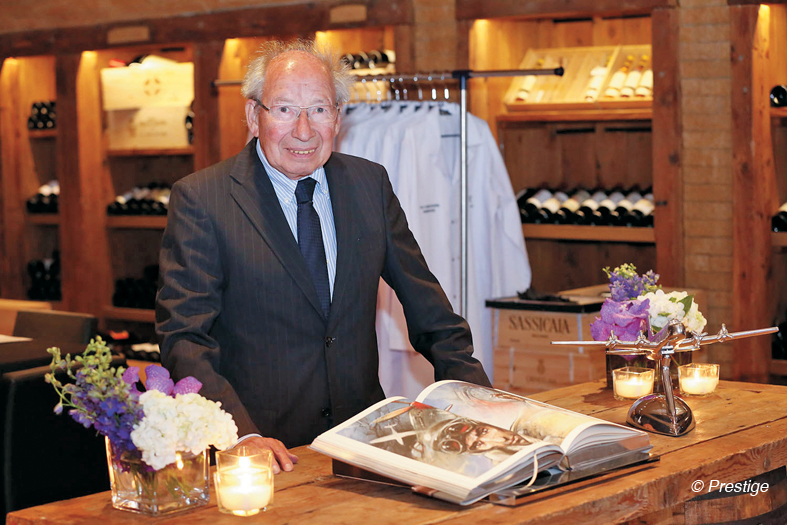 At the age of 81, Kurt Klaus who was at the head of the Development and Research Department at IWC Schaffhausen for almost 50 years, makes regular trips around the world, where the watchmaker and IWC brand ambassador enjoys his new status, sharing his passion and knowledge of classic watchmaking with connoisseurs who share with him values of Haute Horlogerie, Prestige met him in Beirut during one of his trips. Kurt Klaus, when did you start working with IWC Schaffhausen? After studying at watchmaking school in Solothurn in the West part of Switzerland, I wanted to come back to the east part where I was born. So I asked if they wanted a young watchmaker at IWC and I was accepted, this was in January 1957.

Then you grew with the manufacture? Yes, I had to learn a lot at the beginning, step by step I assembled a movement for a pilot’s watch at IWC, then I got transferred to the repair department, I repaired watches specializing in very old watches, pocket watches from IWC from the beginning of the 1880’s, so I came inside around all different watches which IWC produced, and seen the philosophy of the brand.

When did you start to develop movements? Albert Pellatton was my mentor, I made prototypes for his developments.

What about these movements? Pellatton was technical director, inventor, constructor, he was working on a new caliber and I made the practical handmade part of this. One very important task for me was to try and make IWC Schaffhausen movements more and more accurate. The accuracy was a very important thing in IWC and when Pellaton died, I started with my first developments, around 1975. I made a pocket watch movement, a calendar with hands, a date, weekdays, the month and the moon phase. The moon phase watch was the first IWC Schaffhausen complication ever made, never before IWC produced complicated watches, first time to indicate not only the time and the date but a complete calendar, it was a small complication. This was my first own development, it was an experiment but people liked it. It was a limited edition of 100 pieces presented in Baselworld, in 1977 and within two days the 100 pieces were sold out. Then I made the zodiac watch indicating the 12 zodiacs around the year and a pocket watch with integrated thermometer to read the temperature. It was functional.

What about the perpetual calendar? I made these calendar systems for pocket watches and when the trend for pocket watches ended, it was in 1981, I started making a perpetual movement on a wrist watch, the idea was to develop an existing movement. I needed no more than 90 parts to transform an idea that was unprecedented in its scope into a functioning complication.

What is the philosophy of IWC Schaffhausen? In two words it is high quality and innovation. Even the founder Florentine Jones was an inventor of new functions in the watch. The basic idea of Florentine Jones was to produce watches with help of machines. This is the reason why IWC Schaffhausen had power stations on the Rhine river, mechanical power stations to give energy to the manufacture. Innovation was for instance a regulating system with a very long index, made it possible to move very slowly to make very precise regulation of the moon. This was one, in 1884 IWC produced the first «digital» watches in its history, with hours and minutes using numerals, while the seconds were shown in analogue form with a hand. This was then a real innovation and they produced it during around 5 years.

There is a watch named Kurt Klaus, what about it? The Da Vinci, edition Kurt Klaus. The Da Vinci is a complication suitable for everyday use. For the first time ever, the synchronization of the calendar indicators, including an extremely accurate moon phase display, were complemented by a four-digit year display. To the astonishment for the watchmaking world, the calendar was constructed so that it would go on functioning correctly for more than 500 years.

What was special on this edition? The new design of the case, it was the idea of our new CEO Georges Kern, he said 20 years of success of one model the Da Vinci is a crazy long time, we should do something new and our designers created this new case. In this time there was only the engineers team, I had already retired and we developed a new chronograph movement, I was part of the group but no more the head. «The philosophy of IWC is high quality and innovation.»

You are in Beirut to give a watchmaking class, how do you feel? I’m happy to be able to do it. The guests will disassemble parts of a pocket watch movement, then reassemble it. It’s good that at my age I’m still able to help them to do this.

You are 81 and still very active. I look forward to my regular trips abroad, whether to Dubai, Hong Kong or Tokyo, where I meet informed collectors and brand connoisseurs to exchange ideas. I also have my family, my wife and children. I am even a great-grandfather which is my greatest happiness in life.

What is the difference at IWC Schaffhausen from when you started and what it became now? One big difference is the new technology, even when I started in 1957, we had for the production of parts mechanical automatic machines, today we have the digital machines, computers for almost everything, except for watchmaking. Watchmaking is still the same. Today when I’m in the assembling department, they do the same as I did 60 years ago, while it’s a complete change in the production of parts, it is still the real watchmaking in the assembling, the finishing of parts. When the parts come from the machine, they are technically ok, precise, but they have to get some good finish because it is not only a machine, it must be something luxurious, and the finishing is still handmade.

Do you wish to add something? I’m happy that watchmaking is still the same, handmade, hand assembled, this is the quality. I was always very fast in using new technologies, when I heard that we use the computer to make drawings, I got my first computer thirty years ago after the Da Vinci. And from this moment I never made one drawing by pencil, I made everything on the computer and this is very good.

Previous
The Mexican Legion of Honor for Dr Ghassan Skaf

Next
Renovation of Joanna Dahdah Boutique