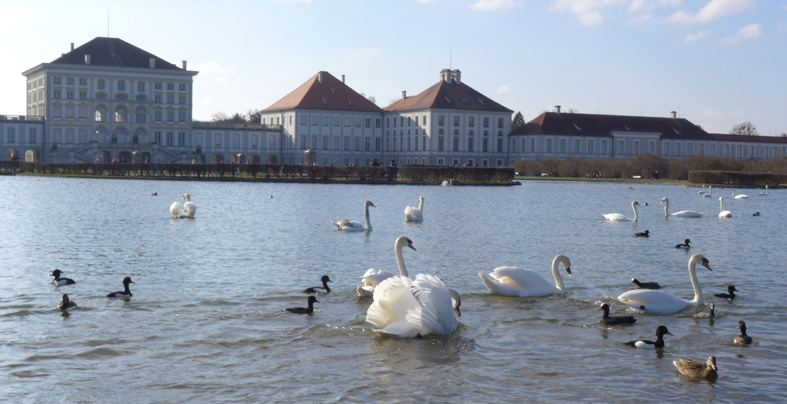 The wealth of Palaces and Beauty of Places

At the time of the holidays, a trip is always welcome especially if the destination is favorable to rejoicing and enriching festivities. It was in this context that Professor Bassam Lahoud traveled to Bavaria Germany. He presents to Prestige snaps of striking beauty, during a long stopover in Munich and Bad Tölz. The palace of Nymphembourg, from the lakeside located at the entrance. © Prestige/Photos: Pr Bassam Lahoud

The Nymphemburg Palace in Munich

With the park next to it, the palace of Nymphemburg, literally the castle of the nymph, is now one of the most famous sights in Germany. Built between 1663 and 1664, it was formerly the summer residence of the prince-electors and kings of Bavaria. The central building, which is the oldest, is the work of Agostino Barelli. It was commissioned in the style of an Italian villa by Prince Elector Ferdinand Maria of Bavaria. He wanted to gift the palace to his wife Henriette-Adelaide of Savoy on the occasion of the birth of his son Maximilian-Emmanuel. She dedicated the residence to the Roman goddess of the Vegetation and her nymphs, which explains the name of the castle.

Over time, the palace was enlarged and transformed, notably by the addition of lateral wings, stables, and an orangery. From 1715, four pavilions were added to the historic building by Joseph Effner. Completed in 1730, the circular arrangement, the Schlossrondell, in front of the main wing was considered at the time as an architectural marvel. The Marienplatz or Place de Marie

Of Gothic style, the Marienplatz, named after a Marian column erected in its center to celebrate the end of the Swedish occupation is dominated by the new Town Hall, built between 1867 and 1909. Its façade has stone features and its 260-foot tower is of neo-gothic style. Its chime sounds at noon and 5 pm and moves thanks to animated characters representing a game, a tournament of knights and dancers.

Next to the Hotel de Ville is the church of the Marienplatz. In the markets of the Middle Ages, tournaments took place on this square of the city. Today, the tower of the new town hall was inspired by these tournaments and attracts millions of tourists a year. The pedestrian area between Karlsplatz and the Marienplatz is very lively with many shops and restaurants. Munich’s white sausage is the most well-known culinary specialty of the Bavarian capital. It was created in the ZumewigenLicht inn by a Munich cook.

The Cathedral of Our Lady of Munich

It is the largest, located in the center of the city, on the Frauenplatz. It replaced an older church of the XIIth century, built in 1468 by Jörg von Halsbach. The cathedral was severely damaged during the Second World War, and its restoration was completed in 1994. The two towers, completed in 1488, are surmounted by the famous domes dating from 1525. Their design was copied from the Dome of the Rock in Jerusalem, of Byzantine inspiration. It is believed that this is a representation of the Temple of Solomon.

The Church of St. Peter

Constructed in the XIIth century, it is dedicated to the first apostle. The first church was made of wood, followed by a Romanesque church with three naves and two towers, and finally, this one consecrated in 1190 by the Bishop of Freising, Otto de Berg. It was restored in Gothic style after a fire February 14, 1327, that burned a third of the city. The high Gothic choir dates from 1368 and the two half-collapsed towers give way to a central bell tower in 1386. After the Thirty Years War, a high spire of 92 meters topped the bell tower and the choir was rearranged in the baroque style. Johann Baptist Zimmermann redecorated the interior with rococo-style ceilings between 1753 and 1756. Erasmus Grasser is the author of the statue of St. Peter at the high altar. It is home to the Bayerische Staatsoper, State Opera of Bavaria and the Bayerische Staatsballett, the Bavarian State Ballet. The building, located on Max-Joseph-Platz, is a building of neoclassical architecture. Its construction began in 1811, substantially on the plans of the Odeon theater in Paris. It was inaugurated in 1818. During the Second World War, the theater was destroyed. Its reconstruction lasted from 1958 to 1963. The capacity of the hall is 2.101 places. Inside the famous pub restaurant Augustiner on the Marienplatz. © Prestige/Photos: Pr Bassam Lahoud

Bad Tölz, in the heart of Tölzer Land

Its fame goes back to the XIIth century. Bad Tölz-Wolfratshausen, a district of Upper Bavaria with a surface area of 30.8 km2, is a town of 19,000 inhabitants in the Isar valley along the river of the same name which waters it and offers magnificent views of the Alps and the Tyrol. A popular tourist destination from Munich, Bad Tölz is a spa with the best water park in the region, Alpamare, with hotels all around, museums and restaurants, not to mention the many churches and parishes. Its architectural heritage is remarkable.

Beautiful baroque-style mansions adorn the dynamic and commercial Marktplatz center, with magnificent paintings or sculptures on their facades. Many vestiges that mark its history have been restored. Between 1937 and 1945 it hosted the SS-Junkerschule Bad Tölz, a training center for officers of the Waffen-SS. At the end of the Second World War, the center was the base for the first battalion of the American Army until 1991. Bad Tölz has also witnessed in 1956, the birth of Tölzer Knabenchor, a choir of boys who acquired an international reputation in the 1980s, and in 1987, the famous Bananafishbones Group.

The main street of Bad Tölz, visited mainly during the Easter holidays by the inhabitants of Munich. © Prestige/Photos: Pr Bassam Lahoud

Detail of a house in Bad Tölz with frescoes, characteristic style of the city. © Prestige/Photos: Pr Bassam Lahoud

Previous
Travel in time On the Nile of the Pharaohs

Next
Members of the Press Order visiting Dr. Samir Geagea