Photo of the prizewinners holding their trophies. © GPHG 2019 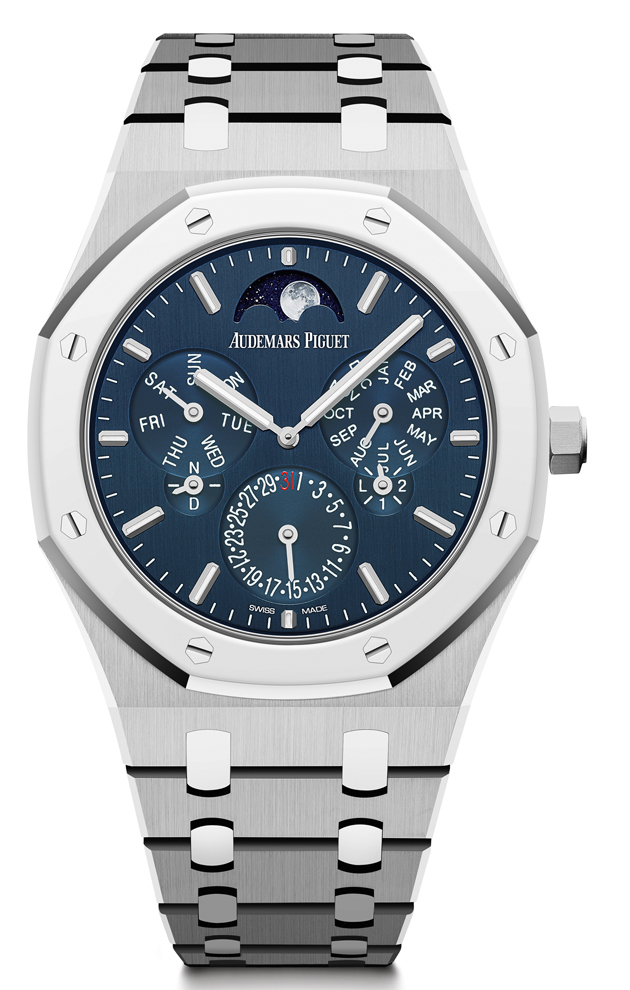 With a movement of 2.89 mm in thickness and a case of 6.3 mm in height, the new Royal Oak Selfwinding Perpetual Calendar Ultra-Thin becomes the world’s thinnest automatic wristwatch. The Manufacture’s R&D team has integrated movement development, design, and ergonomics in the conception of this new timepiece to boost its efficiency. © Audemars Piguet. 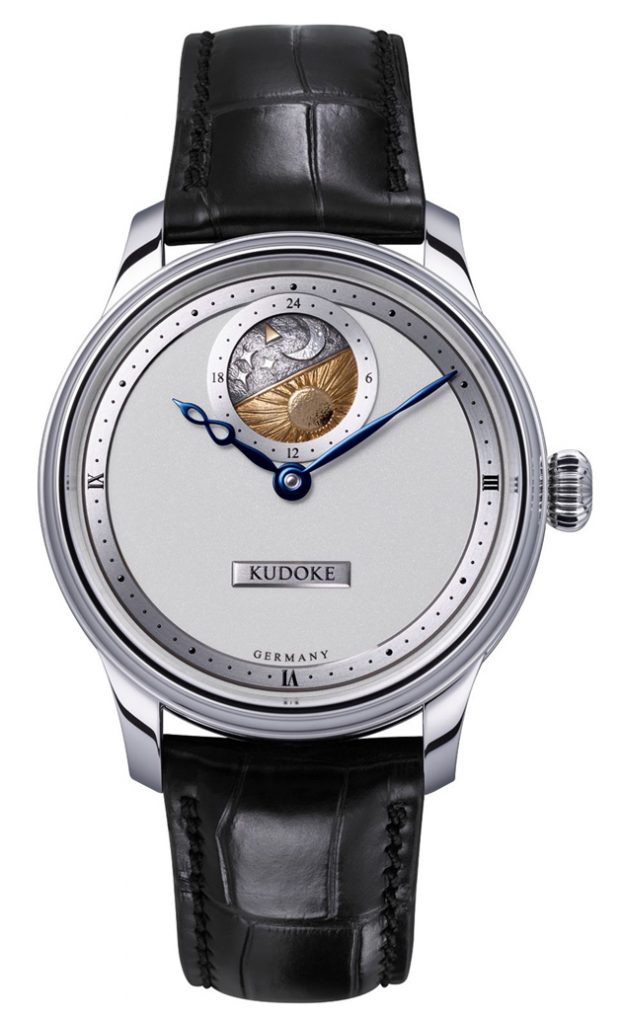 At the front, the eye is caught immediately by the rotating domed sky disk. Hand engraved and electroplated in three colors it demonstrates the creativity of Stefan Kudoke. A small gold-plated triangle indicates the hour of day or night, the upper half of the 24-hour-indication shows intuitively the current day or night time. The dial combines roman as well as Arabic numerals on the two rhodium-plated rings put on. The attentive observer can find the infinity sign included in the hour hand as well as balance cock engravement in the movement. © Kudoke. 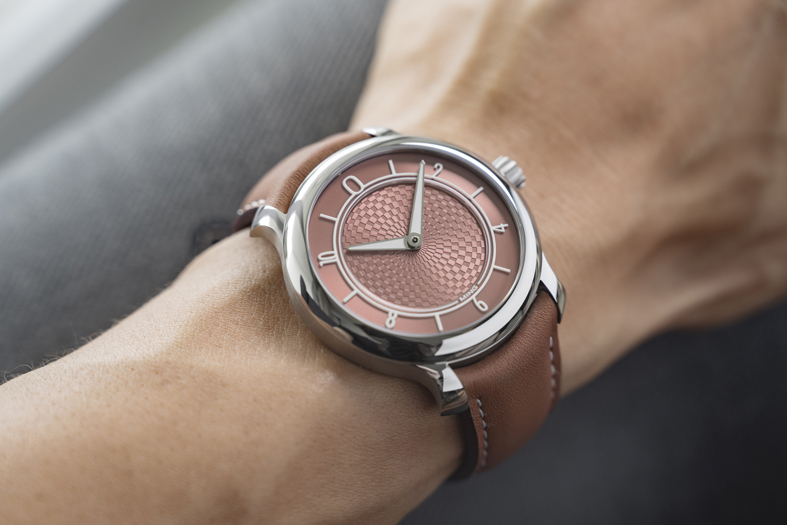 The 17.06 presents a classical color scheme is clean and restrained modern forms; from hour markings to case geometry. It is a considered study in textures and light: a warm etched copper dial contrasts against the polished-brushed case, multiple dial layers, and reflections of the sapphire ring from which luminous hour markers appear suspended. Both dial and hands are loaded with Super-LumiNova C1 for a distinctive nocturnal signature. © Ming. This exceptional timepiece, whose case, movement and time display complications are manufactured in 18K gold, is the culmination of three years of development. As time passes, this gives the watch a fascinating and ever-changing face. To know the exact time, simply note the hour shown and add the precise minute to the tens-of-minutes indicated by the Genus. Hours are indicated at 9 o’clock, tens-of-minutes are shown by the lead traveling indicator – named “the Genus” – which moves freely from one central orbit to the other, and the precise minute is read on the rotating dial in the traditional 3 o’clock position. © Genus. 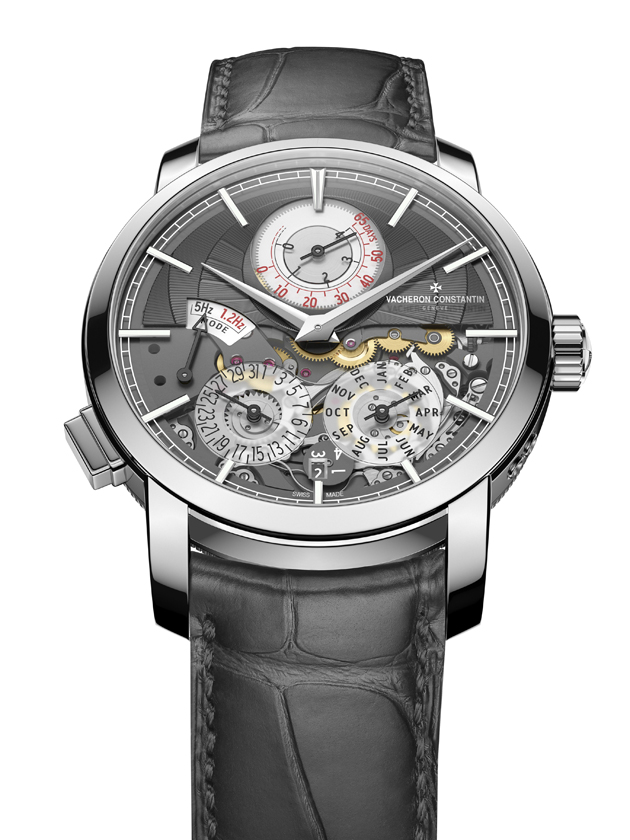 When worn, the Traditionnelle Twin Beat Perpetual Calendar beats at a high frequency that is aligned with modern active lifestyles, displaying the hours, minutes, date, month, leap year cycle and power reserve on its dial. When the watch is not being worn, its in-house developed caliber 3610 QP can be slowed down in order to guarantee an extended power reserve of at least 65 days. © Vacheron Constantin. 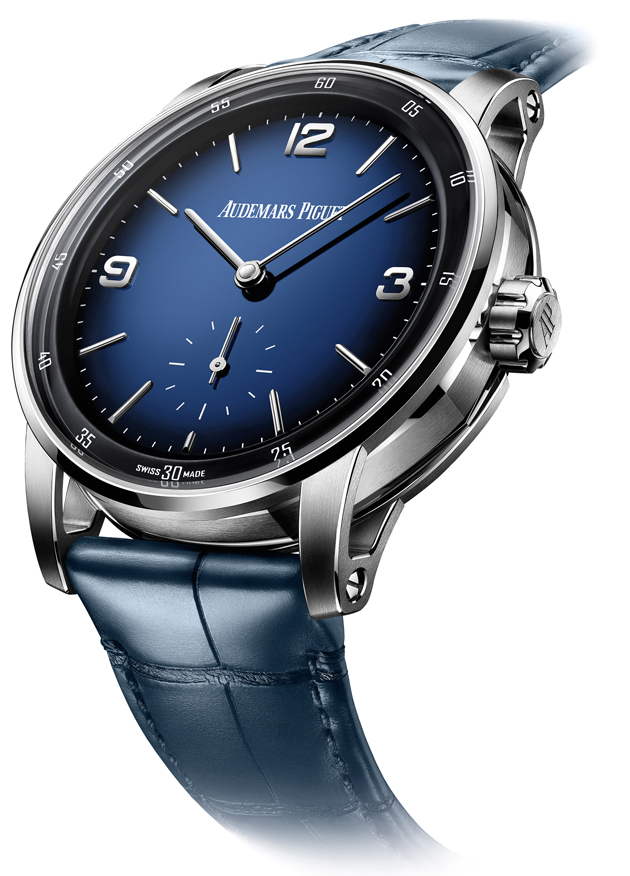 This contemporary wristwatch has the sonic power of a pocket watch. Its exceptional acoustic performance, sound quality, and harmonic tone are granted by the patented gongs, case construction and striking regulator developed at the time. The 18ct white gold case is complemented by a smoked blue enamel dial set off by white gold hands, applied indexes and numerals. © Audemars Piguet. 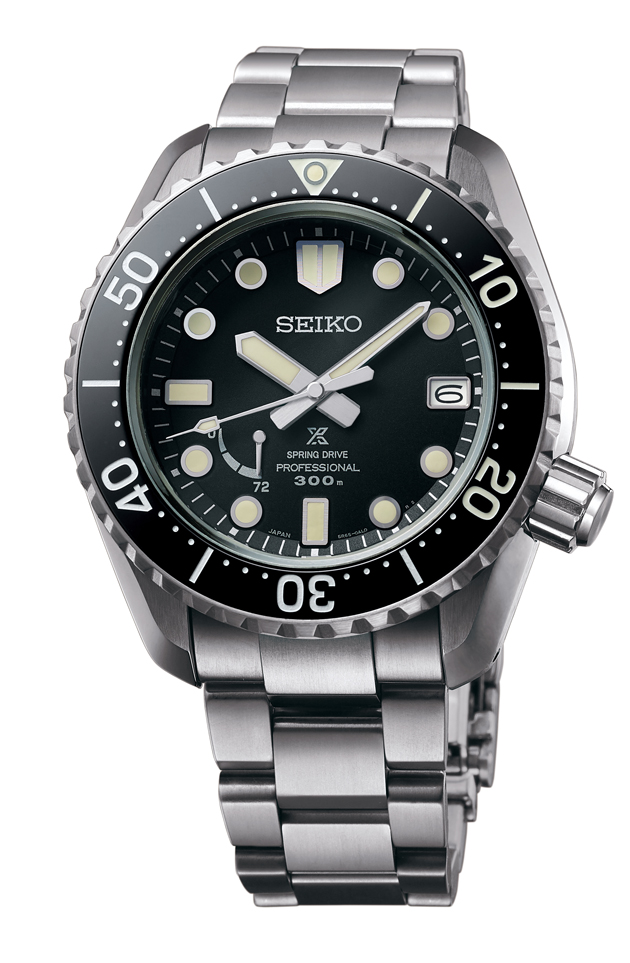 This year, the 1968 Seiko Professional Diver’s design is expressed anew in a line of Prospex watches for sport on land, in the sea, and in the sky. This diver’s watch with titanium case and bracelet is at the center of the LX line. The center of gravity of the case is lower so that the watch sits comfortably on any wrist. © Seiko. 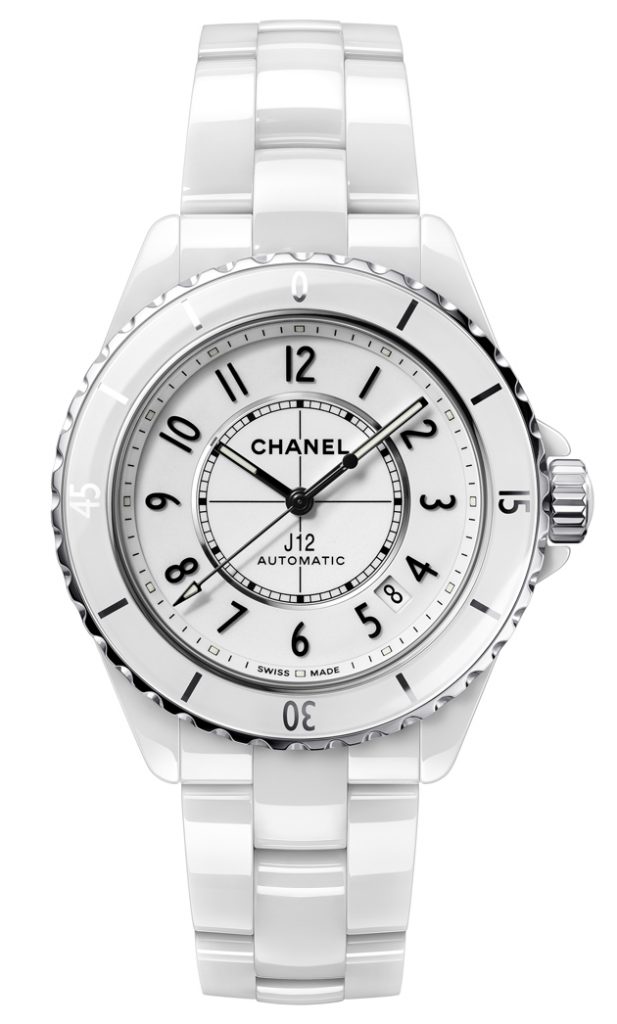 The latest J12 now has a one-piece ceramic case equipped with a sapphire crystal so the new 12.1 caliber automatic movement, can be admired. The oscillating weight has been totally redesigned in tungsten to produce its openwork while maintaining efficient rewinding power, as the Chanel Creation Studio wanted a perfect circle, one of the graphic signatures of Chanel Haute Horlogerie. The caliber 12.1, a chronometer offers a 70-hour power reserve. © Chanel. 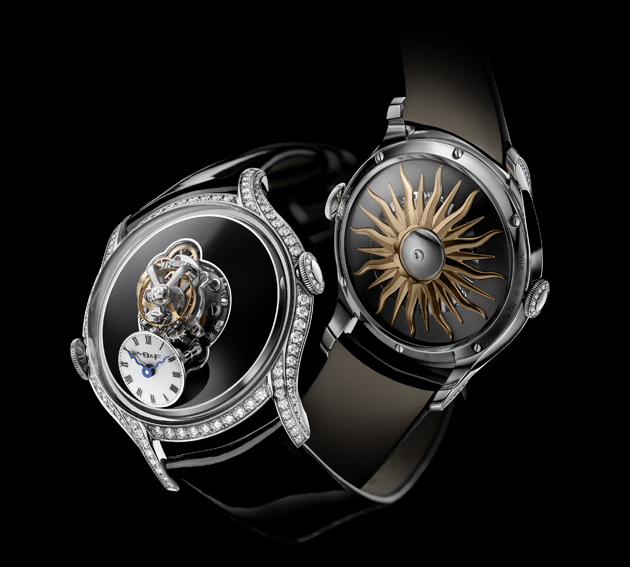 Legacy Machine FlyingT, the first of MB&F’s three-dimensional horological art pieces dedicated to women. A round case in white gold, with a steeply cambered bezel and slender, elongated lugs, is fully set with diamonds. A high, extravagantly convex dome of sapphire crystal rises from the bezel. Beneath the dome, a subtly curved dial plate, liquidly black with layers of stretched lacquer or glittering with blazing white diamonds. © MB&F. 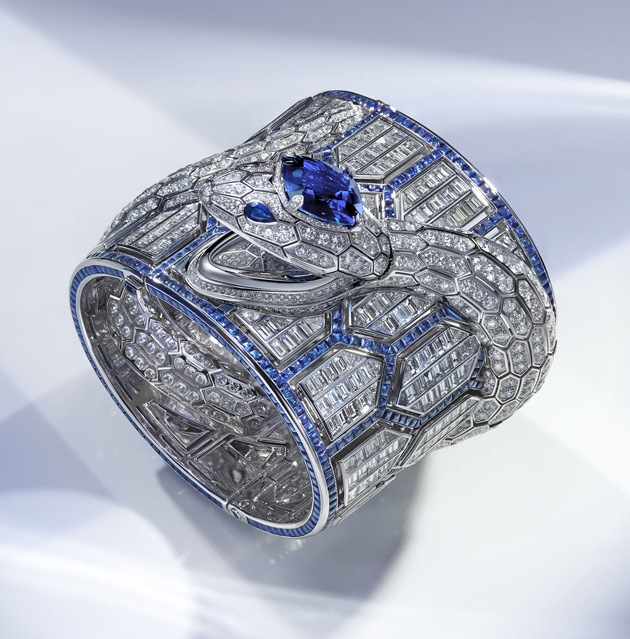 The cuff features a snake sinuously coiled around it. It is embellished with baguette-cut diamond scales. Truly spectacular, this one of a kind creation is the most expensive high-end timepiece ever made by Bvlgari, comprising a massive number of precious stones. The snakehead is crowned with a 10ct Sri Lankan sapphire and a total of more than 60ct of diamonds and 35ct of sapphires form the snake’s body and scales. Serpenti Misteriosi Romani High-Jewellery secret watch in 18ct white gold is a unique piece. © Bulgari. The new Arceau L’heure de la lune watch offers a unique vision of Earth’s satellite with the simultaneous display of moon phases in both northern and southern hemispheres. Two mobile counters gravitate on a meteorite or aventurine dial, revealing mother-of-pearl moons in step with an exclusive module, coupled with a Manufacture Hermès movement. This Haute Horlogerie timepiece is issued in two 100-piece limited editions. © Hermès It is made of nickel silver, vertically satin-brushed by hand and black rhodium-plated. Of the three small apertures, the first serves to show the hours, offset at 2 o’clock and appearing on a glare-proofed sapphire crystal disc. The second opening features an original power-reserve display mechanism, distinguished by a large dial cut-out revealing part of the finely sandblasted and black rhodium-plated main plate. Located in the center of the minutes counter at 12 o’clock, the third aperture displays wheels and movement decoration. Limited to 20 pieces, the FB 1R.6-1 model features a 44 mm-diameter case, made of carburized stainless steel. © Ferdinand Berthoud. Its elegant and strong mechanism is housed in a stylish and robust case. The in-house movement of the Vingt-8 was designed, built, and assembled in its entirety in Voutilainen workshops. The design and philosophy of the movement combine respect for longevity and precision with classical watchmaking tradition. © Voutilainen. The Manufacture Calibre MT5612 that drives the Black Bay P01 model displays the hours, minutes, seconds and date functions. Its openwork rotor is satin-brushed with sand-blasted details, and its bridges and plate have alternating polished sand-blasted surfaces and laser decorations. © Tudor. The watch, like the atomic clock, is a novel construction and is designed specifically for the AMC project. It includes typical Urwerk features such as the power reserve indicator and two stacked barrels for a power reserve of four days. The watch also has Urwerk’s Oil Change Indicator, which shows when the movement should be serviced. © Urwerk.