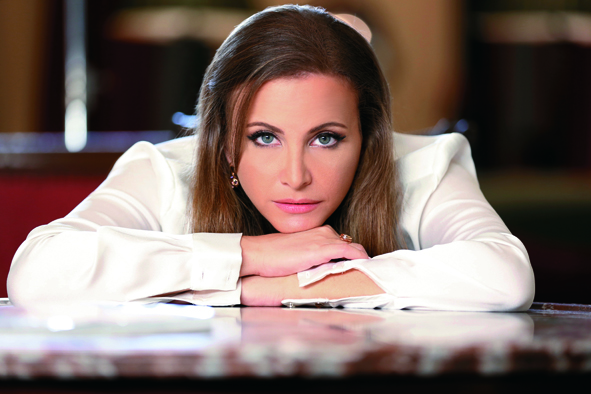 She is full of energy, enthusiasm, and love of life with a capital L. The sacred love of God and her Country, her family … and love of others. On the occasion of the 71st anniversary of the Independence of Lebanon, Tania Kassis offers at Casino du Liban, a gift of size, a concert of love rich and varied on her own way. More than three hours passed in a flash with Tania, who opened her heart to Prestige and made a cry of distress, which is also a call for hope and peace in her beloved country, Lebanon. «The lion is my favorite animal because it is imposing but gentle as a teddy that we want to hug.»

Tell us about “Watani”, your new concert … Organized by Cynthia Sarkis Perros, the concert, which bears the name of my song “Watani”, will take place on November 14th and 15th at the Theatre of Casino du Liban. It is no coincidence that I chose that date, which falls a week before the Independence Day of Lebanon. “Watani” is a message of love for Lebanon and the Lebanese Diaspora whose presence is strong and vital for the country. The concert will include my old and new songs written and composed by Marwan Khoury, Nizar Francis, Michel Fadel and Mike Massy, and a recitation of excerpts from Gibran Khalil Gibran and perhaps Amin Maalouf. The concert will then tour to Paris, London, Dubai, Abu Dhabi, and will be subtitled to allow a wide audience to understand the content.

How do you interpret it? The concert is a special tribute that I give to my country. Through songs, but also a voice telling the story of Lebanon and highlighting the attachment to the homeland, this great unspeakable and inexplicable love. Lebanon is a love story, a romantic relationship, an experience, an attachment similar to the one we feel towards a man, which can be hard sometimes and we want to leave. We listen to the voice of conscience, that of all Lebanese who can get us away or closer to the country. In the end, a choice is to be made. Each person can find him or herself in this topic. Once we praised the beauty of Lebanon. Today, the mission of the new generation is different.

At which stage your professional career burst? Actually, there were two major turning points. The first was the success of the Christian-Islamic Ave Maria in 2009 that made me very famous in Lebanon, but was a first step towards international expansion. And the second was the great success at the Olympia that really launched me with a wider audience internationally.

How did you get the idea of Ave Maria? I grew up in a house near a mosque in Beirut. Upon learning in 2008 that the Annunciation, that is celebrated on March 25th, became a Christian-Muslim official national holiday, I had the idea to make a prayer shared by both religions, a Christian-Muslim Ave Maria, for two reasons. On one hand, for the great reverence that I have for the Virgin Mary. And on the other hand, for the respect I gained daily hearing the voice of the muezzin call to prayer. I had the inspiration to join the two calls, “Hail Mary” and “There is no God but God.”

What impact had precisely the Christian-Muslim Ave Maria locally and abroad? The national impact made ​​by the Ave Maria was in September 2009, at the VI Games of the French speaking areas, that took place in Lebanon. At the opening ceremony, I had the honor to represent my city Beirut by interpreting Ave Maria with in the background cast of the muezzin, Allah Akbar. The Christian-Muslim Ave Maria had strong echoes with numerous media coverages in Lebanon and abroad. Pope Benedict XVI has even requested a copy of this shared prayer.

You started your career as a soprano. Today, which title would you like to have? Soprano is my education, my training, my title, for the moment. Later, I will be proud and Tania Kassis will be enough.

Your last concerts are more focused on the homeland … Half of the repertoire of my concerts is actually patriotic, like “Trabak ya Lebnan”, “Ounchoudat Bayrout” or “Jerusalem”, the symbol of the three monotheistic religions, among others. But my repertoire is varied. I sing what I am, I sing my experiences, love, joy, sorrow… «I ​​wish I was Eva Peron that marked the history of Argentina.»

You are now part of the club of superstars who have honored their country in Paris and Sydney. Which public was mostly in communion with you? Two publics have touched me. First at the Olympia in Paris on the prestigious stage that has hosted international stars, I presented my songs that blend the East and West, which is a bit my signature. Communion with the public has been very strong. At the time of my arrival on the scene, the Ashrafieh attack was still fresh. The public had the dumps. The fusion with the public touched me deeply, melting hearts and minds in perfect communion. Besides, I’ll never forget the reward reserved for me by the public, the longest ovation I’ve ever known. I had four standing ovations during the concert. At the end, I sang with great emotion the song “Trabak ya Lebnan ” composed for me by Elias Rahbani, and the audience was very responsive.

And what about the public of Sydney? The Olympia in Paris and the Sydney Opera House are two of the world’s most impressive scenes. In Australia, the concert has unleashed the enthusiasm of the audience, mostly Lebanese, which was keen throughout the concert, actively participating in the rhythm of each song on Lebanon. This diaspora that is so far has so much thirst for its country. I felt the emotion at its peak during the song “Watani” I interpreted there for the first time. The Sydney Opera House is a place visited by tourists from around the world, so there was in the audience Chinese and Asians who were at their turn excited by the music without understanding the lyrics. For me, it was the most beautiful testimony.

How can art contribute to peace? Music is a universal language that brings all cultures. Many things are expressed and transmitted through the music that arouses emotions, brings back memories, make us dream. It is a way that can take us from reality to dream. I will never forget the message of an Estonian woman who was moved to tears on hearing the song “Watani”, which reminded her of her country.

Which mission would you assign youth with towards their country? Young people need to believe in their country, learn to respect each other, and categorically refuse the use of violence and war. We need an opening to others, a time to listen and understand.

In addition to the Ave Maria, you have songs belonging to you… People have discovered “Ounchoudat Bayrout” Fabrice Mantegna music, who is the singer of ERA group, “Chou Ma Sar “, “Rajaa”, “Jerusalem” of my own composition, “Love is a Tango” in French and Spanish, as well as several texts of songs from my album “Oriental Colors”. The diversity of this album reflects the musical richness I gained in Paris, but also of nostalgia and joy of coming back home. My repertoire includes songs composed by Elias Rahbani, Marwan Khoury, Michel Fadel, and new collaborations with Nizar Francis and Mike Massy.

«I appreciate the sensitive man, loving, caring and proud of my work.»

Do you have a new album on the horizon? A new album is currently being prepared. It will include new songs “Watani” and others. Its launching is scheduled between the summer and end of 2015.

What is your source of inspiration? All the people around me inspire me. I am very honest in my songs and I find my inspiration in my life and in my relationships with people.

Your main quality? I am determined and persevering.

And your main fault? Stubborn, but often rightly (laughs).

Do you have a phobia? Yes. The loss of my parents.

What do you hate most? Hypocrisy.

What is your motto in life? Make people happy around me.

What do you appreciate mostly in your friends? Their confidence and understanding. My friends are actually very close to me.

What is marriage in the eyes of Tania? As a believer, I attach great importance to marriage and couple. It is a serious commitment. The child is the result of the union by marriage, this is very beautiful. The couple is completed through the children that ensure continuity. But now marriage scares me. It is a big question mark. I had many experiences. The couple may be very much in love. But at the first obstacle, they can get away from each other. I try to take the marriage question with ease, although at some moment, we wish to share everything with someone.

What is your idea of happiness? Marriage should mean happiness. For the challenge, I would say that these are shared moments. With my Creator, my family, my friends, my experiences, my outings, my joy, my students, emotions on stage, all these moments make my happiness. «I will give my concert Watani, On November 14th and 15th at the Casino du Liban, before Independence Day.»

What are your hobbies? Dance first. I discovered tango during a trip to Argentina. I was invited to three evenings where love of tango reigned. Since then, it has become a passion, because there is a whole technique in this dance and a lot of elegance. Usually in my concerts abroad, I dedicate a song to the host country, in the language of the country. For Argentina, I had prepared a special choreography that was very much appreciated. Besides dancing, there is of course traveling, skiing and all the pleasures that surround it, fondue, fireplace, good wine, a whole environment.

What are your plans for the future? The year 2015 is rich in projects. I wish to make a world tour with “Watani”, my new concept. I also carry in my heart the Organization One Lebanon, which I chair and which inspired a generation.

What are your dreams today? I dream that every child has the opportunity to live my experience. I refuse to know the confession of others. Sectarian tensions are political. In everyday life, we live a true dialogue of religions. It is imperative to be welded and that Christians and Muslims hold hands to face the danger. Lebanon is a peaceful country that aspires to a final and lasting peace.

In which country would you like to live? There is no ideal or perfect country on Earth. I have long resided in France but I finally decided to return to Lebanon permanently and live in this country, which is mine, yours and that of anyone who loves and is deeply and honestly attached to his homeland. It is sufficient to Just know that. Interview by Maria Nadim

Next
Walk in the Hautes-Pyrénées