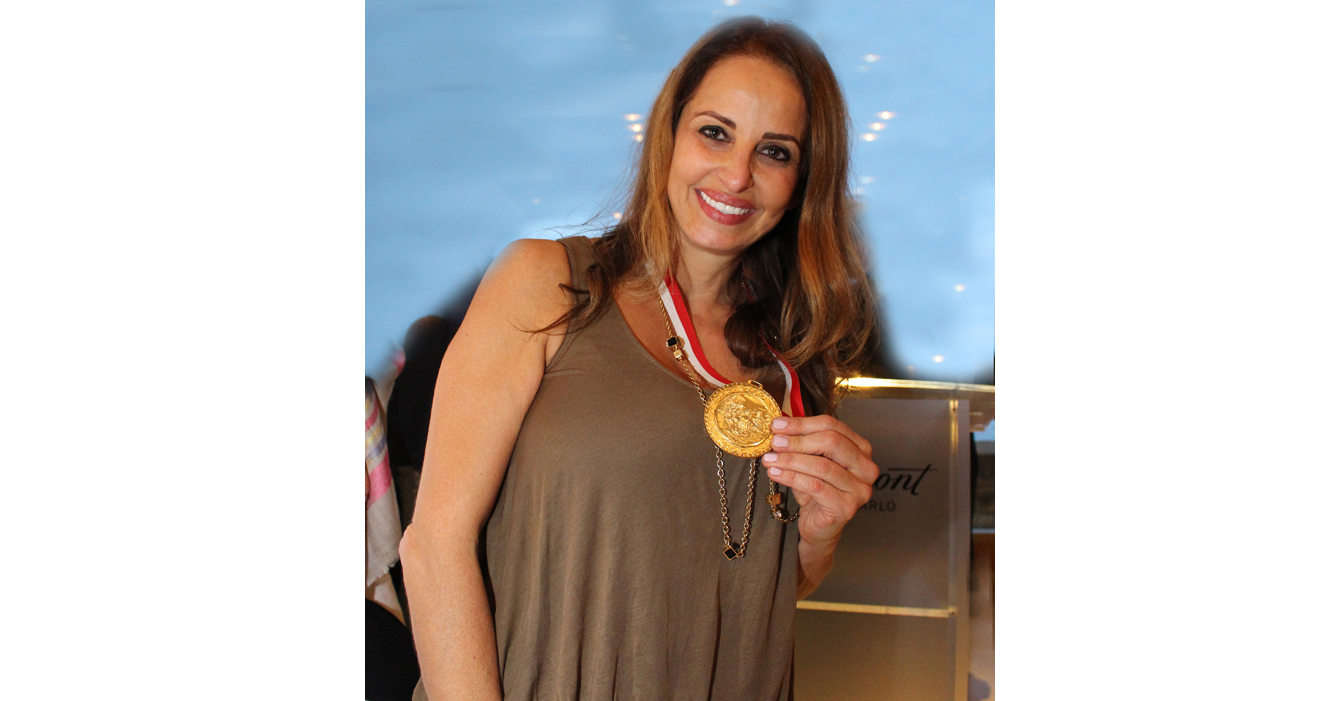 May Sakr The Passion of Bridge

Champion of the recent and prestigious Patton bridge tournament in Monaco, a title never won before by a citizen from the Arab world, a «dream», May Sakr is, since 2010, considered the Queen of bridge internationally. A queen passionate of her game that combines skill, concentration, energy and perseverance … Physical and intellectual faculties that she develops in a steady progress with her mentor, playmate and companion, the Polish expert Krzysztof Martens. On the 365 days of the year, May and Martens spend more than one hundred to practice this game. While extending congratulations to May Sakr and more to Lebanon, Prestige is proud to present a Lebanese Talent that gives the world the most beautiful image of her country. May Sakr proud of the gold medal at Monaco. © Archives May Sakr

Can you give us an overview of your education and training? Following high school in Lebanon, I got a degree in «Computer Science» of the University of Northern Illinois NIU, in the United States.

You are champion of Monaco after your victory at the Patton bridge tournament in Monaco … What are your impressions? We are recent winners of the prestigious Patton bridge tournament in Monaco which took place in October 2015. I am very proud for this victory, during which we met with several teams of champions, including the Team Lavazza with Giorgio Duboin, Madala, Bocci and Bilde and without losing any match.

You hold more than twenty-two international trophies. When was this passion for bridge? What did it give you? Some friends Bridge players introduced us, my husband and I to this wonderful game and I was captivated right away. I enjoy each deal I have in my hands. The intellectual challenge of bridge revealed my taste for the competition.

«My logic, my instinct and my intellect work together to get the best result.» You have a bridge Academy, how was it founded? In Lebanon, there was no place to learn bridge. I was encouraged in this direction by my family who is in this area of activity.

Your career, From the Academy to the Club … The course was designed especially to encourage beginners to get used to bridge tournaments. This is why we started to organize them at the Academy. All students enjoyed the friendly atmosphere and at the same time began to gain trust in them. We also asked former players to participate, which made them closer to beginners and more forgiving. It was a success.

In your opinion, is bridge a sport or a game? Bridge is a game and at the same time a sport for the mind. Remember that the mind exerts a significant influence on the physical. Cognitive processes mobilized by the bridge, including memory, have a positive influence in the prevention of neurodegenerative diseases such as Alzheimer’s in people who regularly play. This was confirmed by recent studies.

How did you encounter your mentor and travel companion Krzysztof Martens? I met Krzysztof because he often came to Lebanon to play with local bridge players and to encourage bridge. He took me under his wing and taught me lessons that introduced me to the high bridge competition.

Krzysztof Martens nicknamed you «Killer», why? Krzysztof gave me this nickname because of my sense of competition that absolutely drives me to achieve my goal, no matter what. My logic, my instinct and my intellect then work together to achieve the best possible result, or sometimes impossible…

May Sakr and her team during the Monaco tournament. © Archives May Sakr

«My dream is to play all the big tournaments in the world and win the largest number of trophies.»

How do you manage to reconcile your life as mother of a family and a bridge player? At the bridge, I try to make a selection of the most interesting tournaments to participate in and I plan my trips well in advance not to impede my family commitments.

What is your main character trait? It is summed up in one word: perseverance.

What is your motto? To enjoy life and make my family happy. The American Contract Bridge League ACBL, is held in March 2016, during the National in Reno. © Archives May Sakr

What is the best compliment you have received? When a great champion Zia Mahmoud told me, «Now you’re a champion. I’m proud of you».

What is your best memory? My best memories are my victories and the pride that accompanies them.

If you were not May Sakr, who would you have liked to be? I would have wished to be a ballet dancer.

What gift of nature you would have liked to have? I wish I could teleport! It would be much faster than the usual transport.

May is the Queen of Cyprus bridge Festival for three consecutive years. In the photo she holds the trophy of October, 2015. © Archives May Sakr.

Lyon, the world capital of bridge in 2017 will host the next World Championships. Will you participate? Yes, I intend to participate in future international championships, notably in Lyon in 2017.

What message would you convey to your compatriots? Always try, each in his own way and according to his abilities and gifts to give to the world the most beautiful image of Lebanon. Interview conducted by Mireille Bridi Bouabjian