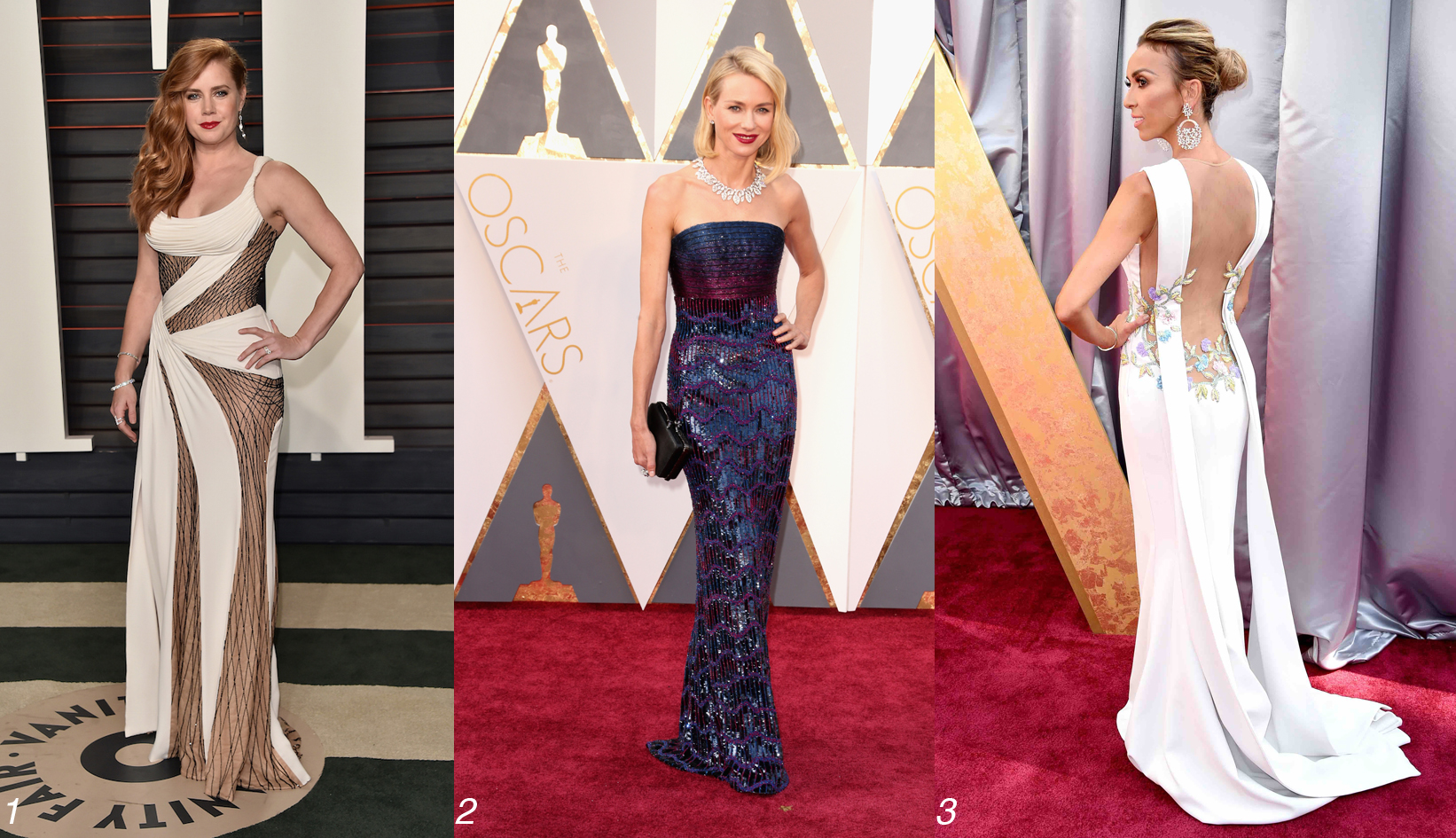 Stars parade on the red carpet in all their glory…

3.Giuliana Rancic. At the 88th Academy Awards, the Italian-American TV star, wife of Bill Rancic, drew all eyes on the red carpet, in her white dress in crepe, with scalloped back and hand-embroidered with pastel flowers, from the Spring-Summer collection 2016 of Georges Chakra Couture. Giuliana gives priority to family, namely her son Duke of whom she takes care personally.

Matt and Luciana Damon. The couple was in Versace. Black tuxedo, satin lapel, shirt and bow tie for the writer and actor. Red draped elegant dress for the Argentine Luciana Barroso Damon.

Heidi Klum. The German-American model, who was noticed for her faux pas on the red carpet, wore to the Vanity Fair Party a strapless dress from the collection Spring 2016 Atelier Versace.

Petra Nemcova. Czech supermodel with ideal measurements. At 16, Petra became a model and muse of brands, presenter of a reality TV show and engaged in humanitarian through her foundation providing assistance to children orphaned survivors of the tsunami in Thailand. The top model is still single. At the Vanity Fair Oscars Party, Petra was very attractive in this glamorous black dress in tulle and lace, from the collection Couture Spring-Summer 2016 by Georges Chakra. The body is in embroidered bands and the skirt in tow unveils her beautiful forms. 1.Freida Pinto. In Beverly Hills, the Indian actress was sublime in the blue dress of the Spring 2016 collection by Atelier Versace. Her romance with polo player Ronnie Bacardi was formalized on the red carpet.

2.Renée Bargh. At 29, the young Australian actress and TV presenter made it on television and with movies, where she starred in Extra, at the age of 17. At the Vanity Fair Oscar Party, she made a remarkable entrance, wearing a stunning black chiffon evening dress, signed Rani Zakhem.

3.Alessandra Ambrosio. At 34, the actress and Brazilian top model, known as the muse of the famous parades angel of Victoria’s Secret, was very sexy and elegant in her multicolored mini dress from the Spring-Summer 2016 Atelier Versace collection. The wife of businessman Jamie Mazur, mother of Anja Louise and Noah Phoenix Ambrosio Mazur, completed her look with a black bag Palazzo Empire by Versace, and suede black thighs. Previous
For or against marriage

Next
Parisienne a film by Danielle Arbid